The UIA Bureau has decided upon the winners of the 2017 UIA Gold Medal and Prizes.

Created in 1961, the UIA Prizes honour professionals whose qualities, talents, and actions have had an international impact on the diverse sectors of architectural practice. This year, the Secretariat received 46 nominations.

The jury has attributed the Gold Medal, the highest honour awarded to a living architect by his fellow architects, to leading Japanese architect Toyo Ito, nominated by the Japan Institute of Architects.

The Auguste Perret Prize for Applied Technology in Architecture will go to Nikolay Shumakov (Russia), nominated by the UIA’s Russian Member Section.

The Robert Matthew Prize for the Improvement of the Quality of Human Settlements went to South African Carin Smuts. Ms. Smuts was nominated by the UIA’s French Section.

This year, the Jury decided not to attribute a prize for the Sir Patrick Abercrombie Prize for Town-Planning or Territorial Development.

The winners will be presented with their medal at the Awards Ceremony on 6 September, which will culminate the activities surrounding the 25th UIA World Congress in Seoul, Korea. 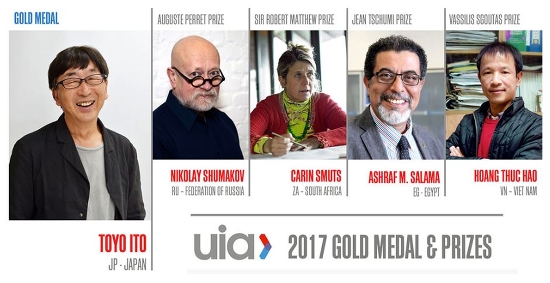